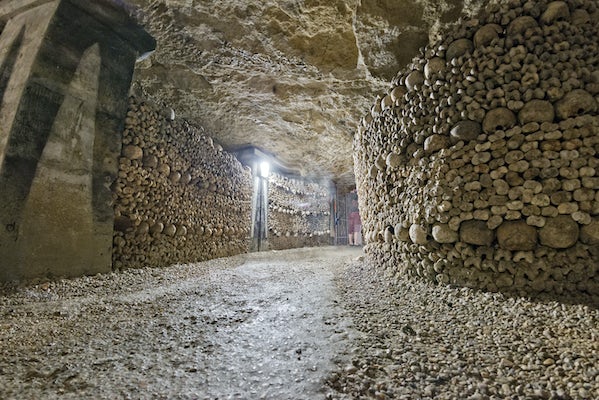 SKIP THE LINE
Do this because
What to expect

Skip the long lines and unlock gates to hidden rooms in the Catacombs on this small group tour. Explore the world’s largest ossuary and discover the buried secrets of underground Paris. Small groups of 7 people allow for an intimate VIP visit of this very special place.

Beneath the streets of Paris there is another, darker side to the city that few get to see.Twenty meters (and more) below street level, the galleries of the Paris Catacombs extend for over 200 miles - a subterranean maze under the city that many are unawareof as they stroll along the streets above.

Initially quarried to provide limestone for the construction of the famous Parisian buildings and bridges, the Paris Catacombs are now home to the bones of more than 6 million former Parisians. Their remains were carefully moved here in the 18th century,in a discreet operation to transfer them from the insalubrious and overflowing cemeteries of the city center. Overcrowding in these cemeteries led to improper burials, open graves and unearthed corpses, spreading disease (and a few horror stories!) into the surrounding areas. Nowadays, wall after wall of stacked bones, and some more slightly macabre compositions, await you as you follow an expert local guide into ‘The Empire of Death’.

Fans of the film As Above so Below will recognize these never-ending gloomy tunnels. Along with millions of ordinary Parisians, it is said that the Man in the Iron mask lies here, as do both executioners and their victims, guillotined during the French Revolution.

Your guide will lead you through the underground passages and into some very special rooms. Only 200 people are allowed in this fragile and remarkable site at any one time, and your small group visit will ensure that you get the most out of this extraordinary

place, allowing you to spend more time enjoying the rooms and interacting with yourguide. This special tour also allows you access to parts of the Catacombs that are closed to the general public. Have underground gates unlocked specially for you and your group, and learn the intriguing stories of those who worked, visited and have been laid to rest here over the centuries, including the secret societies who still visit today.

Past and present Paris and its inhabitants come to life as you explore the city’s gloomy entrails concealed below the surface.

Meet your guide outside the main entrance to the Catacombs- meet in front of the gate on Place Denfert Rochereau. Do not wait in the line or go inside, please go straight to the gate where your guide will be waiting for you. Nearest metro station: Denfert Rochereau (lines 4 and 6). Exit at Sortie 1 and you will see the Catacombs entrance directly across the street. Your guide will be wearing their guide card on an orange lanyard.

Read more
Booking fee
Good news! No extra fees are applied to this booking.
Cancellation policy
Receive a 100 % refund if you cancel up to 1 day before the activity begins. 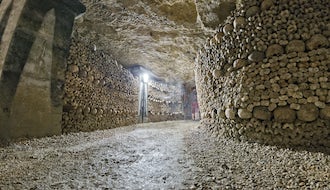 Mobile voucher accepted
from:
$ 122
Sorry, it's sold out
Unfortunately all tickets have been sold out for this event

This half day excursion gives you an opportunity to discover Paris's famous tourist sights and monum...

Undertake a tour into the heart of the mysterious and unknown side of Paris. Your guide will tell yo... Spend your day enjoying two of the most important Parisian sights, Sainte Chapelle and the Louvre Mu...

Walk the footsteps of 2,000-year old history as you explore the heart of Paris, Ile de la Cité. Sitt...

Visit the best attractions of Paris in a day

Paris is a city with a lot of history and even more attractions so if you want to see the best of it...

Guided tour of the Louvre, Notre Dame area and lunch at the Eiffel Tower

Spend a day exploring Paris in a very unusual way. This excursion on foot and river boat will show y...

Paris
View all experiences
from:
$ 122
Sorry, it's sold out